In the past, many people who are on the autistic spectrum have been encouraged to seek out cognitive behaviour therapy in Manchester and beyond as a way to cope with anxiety connected to the condition. In fat, the National Autistic Society promotes cognitive behavioural therapy in this setting,

However, a new study published in The Journal of Child Psychology and Psychiatry this week has added another realm in which CBT treatments may be of huge benefit to the autistic community.

The research, from York University's Faculty of Health, has found that with small children, CBT can not only help with anxiety, but larger issues of emotion regulation – including sadness and anger, to which some autistic people are particularly prone. In fact, around 70 per cent of autistic children will struggle with emotional challenges in some shape or form.

In around half of these children, anxiety will be the main problem, however for 25 to 40 per cent the problem will be other issues, such as anger or depression, for which CBT hasn't been prescribed up until now. There is also, of course, a high rate of suffering from more than one of these emotional problems.

Professor Jonathon Weiss, who is also the CIHR Chair in Autism Spectrum Disorders Treatment and Care Research, says that identifying the power of CBT in treating other emotional disorders will be significant in helping children with autism: "We can use this same intervention to improve children's skills more broadly regardless of what emotional challenge they have. We can make them more resilient to many emotional and mental health issues,” he said.

The study saw 68 children between the ages of eight and 12, and their parents, take part – split randomly into one of two groups. The first group was given 10 sessions of cognitive behavioural therapy straight away, while the other group waited to receive the treatment as a control group.

A clinician, not involved in the admission of the CBT to the children and therefore unaware of which group each child had been allocated, rated whether improvement could be seen in the child's emotional regulation. They saw that 74 per cent of children receiving treatment improved, compared to 31 per cent of those on the waitlist.

Parents were involved in the therapy sessions, acting as co-therapists by practicing what they are learning with the children outside of the sessions themselves. "We believe that children grow and develop and improve within the context of healthy families and this intervention aids to help the family unit more broadly to be the agent of change,” said Professor Weiss.

These particular sessions involved computer programmes, games and exercises with a spy theme, all geared towards building an 'emotional toolkit' for the children.

Researchers are now exploring whether CBT may also have applications treating other neurological conditions, and believe it may have a place in treating ADHD, 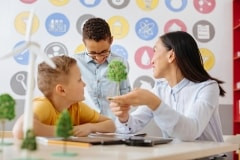