So many Brits are suffering from a problem regarding stress and anxiety that the Mental Health Foundation has chosen to focus on this crisis during its Mental Health Awareness Week.

Between May 14 and 20th, the country will see hundreds of events and campaigns take place to raise the profile of mental health issues, particularly regarding stress and how significant its impact is, ranging from depression to suicide.

According to a recent study by YouGov, 74 per cent of those surveyed said they were so stressed they felt unable to cope. It also found that 51 per cent of stressed UK adults felt depressed and nearly two-thirds were anxious; 16 per cent had self-harmed and 32 per cent had considered taking their own life.

A spokesperson for the Mental Health Foundation said: “By tackling stress, we can go a long way to tackle mental health problems such as anxiety and depression.”

To coincide with the awareness week, the group released a report entitled Stress: Are We Coping?.

As well as revealing the true extent of the stress crisis in Britain, it recommends ways to help people reduce the stress they are experiencing.

Those working in health and social care should also address the psychological wellbeing of those living with long-term physical conditions and provide a “compassionate and trauma-informed response” when presented by a person in distress.

Those experiencing high levels of stress who feel like this is impacting on their day-to-day lives should seek counselling in Manchester as they might be experiencing anxiety or depression as a result. 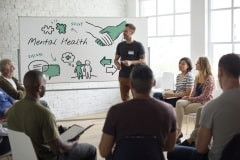