When it comes to your mental health, opening up and talking to family, friends and especially counsellors in Manchester is one of the most effective ways to combat the effects it has on your life. Depression, of course, can be an extremely hard problem for a person to manage, as it affects their will and drive to make those choices.

Anything that could help relieve the symptoms of depression is worth consideration adopting in your day to day life, and one new study has found that weight training in particular may be effective. It's no secret that exercise has long been extolled as a great combat for mental health issues such as depression and anxiety, however weight training has been linked by the University of Limerick with “with a significant reduction in depressive symptoms,” according to The Independent.

If it's been a little while since you last set foot in a gym, then it's important to know there's been a shift in how the everyday gym go-er uses the space. The weight racks used to be the preserve of body-building men, however, it's become far more common to have weight training exercises adopted into all kinds of exercise routines, for both men and women.

The study supports the idea that people are more likely to stick with weight training as it is empowering and confidence building, and provides easy to see results. 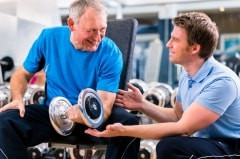